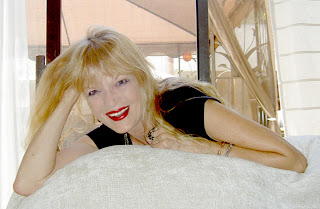 Q -When did you start modeling?

A -It took off in 1967 when I went to London but I had done some small things before in Holland, my country, but they don't really count and also before I went to London I worked in Spain, Barcelona to be exact, and that happened quite unexpectedly because I was walking down the street when a woman came running towards me to say she had a modeling agency (I forgot the name but it became later a big agency) and she could find me work as a model. Actually I was there to not spend the cold winter in Holland and to prepare a book with pictures of myself to take to London where I was planning to go. Mostly I remember to do a lot of TV commercials in Barcelona, for hair, for carpets, for anything. Sylvia Polakov, now a recognized photographer in her own right, was his assistant and I did a short movie with Pere Portabella, but officially you could say I started in 1967, I was 26.

Q -What was it like to be in London in the "Swinging Sixties"?

A -It was exciting, it was buzzing, there was an explosion of creativity, you could feel it and see it on the streets. In any case it was so for me because I was living it.

Q -You've worked with some of the greatest fashion photographers (David  Bailey, Helmut Newton, Norman Parkinson, William Klein and many more),  I suppose some would be more demanding, others nicer to work with...

A -Sometimes it could be demanding, it's easy to work with a good photographer because they know what they are doing but it could be more pleasant let's say to work with Newton because the editors and the stylists and the clothes would be more interesting and he gave you the feeling that you had some input. With Bailey was very easy and pleasant but sometimes there were photographers who did not know what they wanted and then it could be difficult.

Q -The photos Newton did of you with the airplane are very impressive,  how was that session? Did it take very long to make?

A -Well,this was more or less the 4th time I worked with him for English Vogue and it took 2 days which were very demanding. It was very cold and after every shot we had to wait until pilot got down and then went up again and I had to run a lot up and down for Newton to get the plane and me in the right place. The roaring of the motor of the plane above my head was scary and later the pilot confessed that it was actually very dangerous because at a point when he was going down he could not see me. But you know I just wanted this pictures to be smashing.

Q -Is there any other session you particularly remember (as being either fun or terrible)?

A -Not really, sometimes it was very cold and you had to appear comfortable in a summer outfit or the other way around, in a fur coat when it was very hot, but one particular session that was really uncomfortable was in NY in 69 when in the morning, still in the studio, the other model gave me an acid trip which I took, she too, and then we went to the beach to make pictures for Bazaar. Once there the other model was sent home because she could not handle it and there I was all alone disappearing in the sand...it was really awkward and never did that again.There were many fun sessions but right now i can't think of any particular one.

Q -I know that back then models did their own hair and make-up most of the time, when did professional hair stylists and make-up artists become usual on photo shoots?

A -Yes, we used to go around with a suitcase filled with wigs, gloves and even shoes and we could do our own makeup for which they gave you ample time, everybody smoking and chatting in the dressing room. I liked to do my own make up but the hair was always a bit of a problem because you usually had to do it their way. In the early seventies it became more normal to have hairdressers on the set, specially for important shoots. For beauty pictures there always was a make up artist but slowly it became normal to have one for any kind of job, but here I am talking already mid seventies.

Q -What agencies did you work for?

A -When I started out in London I went to Peter Lumley, then the hottest agency there and when I went to Paris I was with Models International which was owned by  2 great ex models, Simone d'Aillancourt and Krista Fiedler, but when my model friend Janet Christijanson with her boyfriend John Casablanca set up Elite I went there. In Italy I was with Ricardo Gay, I think he is still there and in NY I was with Eileen Ford from the beginning because she looked me up in Paris and asked me, and not to forget Spain, in Madrid I was with Magda agency.

Q -You also worked with other models, who do you remember specially?

A -There are many I remember specially because they made a big impression, like Jean Shrimpton, Donyale Luna or Lauren Hutton, others because you worked a lot with them, like Gunilla Lindblad or Christine Steidten or Janet. Again others because you remember them to have been specifically nice, like Maude Adams or Dayle Haddon and others because they became friends, like Veruschka or Wallis Franken.  I never worked with Veruschka but Wallis and I worked quite a lot together and often on location and she was always great fun, always seemed to be happy, I have great memories of her. Of course there were many others but can't name them all.

A -I don't think modeling in itself is any different, there are good models and less good models and good photographers and bad ones, good stylists and bad ones..The cameras are different and a lot of it is digital with direct results but that does not change much for the model. Of course the hype was not there and except for the insiders of the business you did not become famous or got paid that much as in the nineties. Wish I had modeled then, haha. It was nice to work with Linda, she is super professional and knows how to look good and well, it is admirable how long she has been at it. I also liked working with the younger girls like Karen Elson, Iris and Guinevere very much, they are great models, know what they are doing and saw great pictures of them.

Q -Do you think there is more pressure on the girls nowadays? There is a lot of talk about models being too thin, what do you think?

A -No, the pressure has always been the same, or do you think in the sixties or seventies you could be out of shape and work? Too thin is not healthy and some overdo it but it is always been like that, they just talk about it now. I must say fashion often looks good on very young thin girls (not too thin though because that looks scary) but it is of course not realistic. On the other hand does fashion need to be realistic? So let me say I don't know, some people look better skinny and some look better full, but when the too comes in, too skinny, too fat, neither is good I think.

A -Oh, Diana Vreeland was something else, she was very powerful in America and when I met her I was very impressed. Later I sold her one of my Tunics, in red of course. My all time favorite was Polly Allen Mellen, who was Editor in Chief of the American Vogue in the eighties and gave me a lot of courage and good feelings. There was this great editor in London who worked for Nova, the hottest Magazine in the early seventies but cannot remember her name right now and as a matter of fact Francine Crescent, Editor in Chief of French Vogue, was a very special and creative person too. A few years ago I met Anna Wintour in Paris at the occasion of Helmut Newton's funeral.

Q -When you were in Paris you did many fashion shows, the Saint-Laurent couture shows are memorable, tell us something about Yves.

A -To do the shows for Yves St Laurent was always a great pleasure, the ones I liked to do best. In the seventies the shows got more and more exciting, the music, the decors, the press and a very excited audience, it felt really good walking down the catwalk dressed by YSL and the music is going: Isn't she lovely, isn't she beautiful..........

Q -You also did Fashion shows for young designers who were just starting, and in time became very big, like Jean-Paul Gaultier.

A -Yes, really there was a sort of explosion of new, some young, designers. Apart from Jean Paul there was Thierry Mugler, Claude Montana, Issey Miyake, Chloe, Jean Claude Luca, Kenzo, Alaïa, Versace. Do I forget some one?

Q -Who are your favorite fashion designers, both personally and for their designs?

A -Well, I think for me these two things go together, I don't think I would like someone and not like what he or she does or like what he or she does and not like the person. But I have a very special place in my heart for Yves St Laurent, for me the greatest designer I met and a very interesting, poetic person with lots of humor. Jean Paul Gaultier is also one of my favorites and definitely a very nice person. I love most of Lacroix, I never met him and never met Galliano but like his work very much too. Lagerfeld is a very generous person, I worked quite a bit with him, and what he is doing with Chanel is great. Then there are new ones but they have not proved themselves yet all the way, although some are very good, like Pilati.

Q -You have always been interested in fashion, and have created a style of your own, even making your own clothes, I suppose the transition to becoming a designer yourself was natural...

A -There never was a transition, I designed and made my own clothes since I can remember and went to the Academy of Fine Arts for 4 years and studied Fashion but it was because I was good looking and people liked to take pictures of me that I became a model also. It is just an other part of Fashion and I love all of it. And what I really like and have not fully exploited yet is fashion Illustration, like I said Fashion is my Passion, then, now and always.

In what language should I publish? / ¿En qué idioma debería publicar?

"Don't try to be original, try to be good" (Paul Rand)